In the past The Royal has operated as a hotel, eatery, wedding and events catering hub and bar.

The building is a large two storied wooden structure built in a classic NZ colonial style.  The Royal was built in Featherston in 1868 as a hotel with horse stable facilities for travellers to Wairarapa and beyond. It was extensively rebuilt in 1893 after a fire.

The Town and Environs

Featherston is a small historic town in the South Wairarapa District, in the Wellington Region of New Zealand's North Island. It is at the eastern foothills of Rimutaka Range close to the northern shore of Lake Wairarapa, 63 km (39 mi) north-east of Wellington and 37 km (23 mi) south-west of Masterton. It is in driving distance from Wellington (one hour) and is the gateway to the Wiararapa which is known for its many events and festivals, natural beauty, wineries, food and boutique shopping.

The town has a population of 2,360 (June 2015 estimate). Featherston has increasingly become a satellite town of Wellington since the Rimutaka rail tunnel opened in 1955 on the Wairarapa Line; at the 2006 census, 36% of employed Featherston residents worked in the Wellington metro area.

In the past Featherston has been regarded somewhat negatively with poor social statistics typical of many dying rural towns. This situation is beginning to change rapidly with increased tourism particularly associated with the Fell Train museum, the new Rimutaka Cycle Trail, more food outlets and shopping targeted at visitors and the influx of younger couples buying residential property in easy commuting distance to the Hutt and Wellington.

The world’s only Fell Engine - a survivor from the days of the Rimutaka Incline Railway can be seen in the local museum. The town also is strongly linked to World War One (the area hosted a large military training camp). The Featherston Heritage Museum explores the history of the Featherston Military Camp. It is also the spot to rest, recover and refuel after biking the nearby Rimutaka Cycle Trail, a ‘Great Ride’ on Nga Haerenga, the New Zealand Cycle Trail. The Wairarapa side of this ride takes in urban and rural landscapes with exceptional experiences on the historic Rimutaka Rail Trail and the Wairarapa south coast.

In terms of natural sights Featherston is near the shores of Lake Wairarapa, and the wild stretch of cliffs, rocks and water that is Palliser Bay. Palliser Bay is one of the region’s natural highlights with an historic lighthouse, native fur seals and the Putangirua Pinnacles, which provided an eerie backdrop in Sir Peter Jackson’s The Return of the King movie.

For foodies Featherston is increasingly becoming known for its well-known cheese shop C’est Cheese and a very well regarded bakery. The town also has vintage, antique and second hand book shops. Last year and this year the town ran a very successful second book festival as part of its desire to become known as ‘A Booktown’. (http://www.booksellers.co.nz/book-news/featherston-becomes-international-booktown, www.booktown.org.nz) 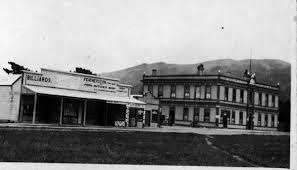